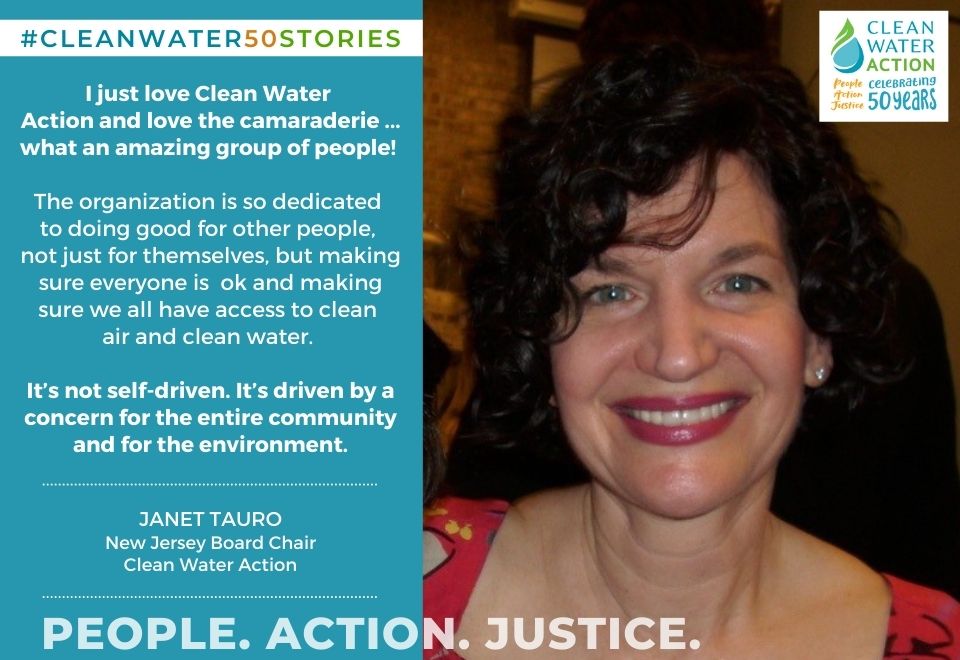 To celebrate Clean Water Action's 50th anniversary, we’re sharing our history and journey with the people who have joined us along the way as we worked to protect clean water through #CleanWater50 stories.

Janet Tauro is a long time grassroots activist and NJ Advisory Board Chair of Clean Water Action. She started her journey with her participation in the Tooth Fairy Project and concern about the health effects of radiation on her then young children from the nearby Oyster Creek nuclear plant (Lacey Township NJ). She formed GRAMMES (Grandmothers, Mother an More for Energy Safety), and together they fought for and secured additional safety measures, early closure and decommissioning of the facility. Her talents as a researcher, testifier, influencer, agency navigator and former journalist are invaluable. Thanks Janet for the pivotal role that you have played in safeguarding communities and raising the visibility of Clean Water Action in the Garden State.

What is your connection to Clean Water Action?

Hello. My name is Janet Tauro. I live in Brick, New Jersey, and I have the incredible honor to serve as the New Jersey board chair of Clean Water Action. It's a position that began in 2014. But before that, I served on the board for about five years.

I first met Clean Water Action in the late nineties, and I think many of us are drawn to become involved in the community or active or to meet an environmental organization out of concern for our children. At that time, there was a big mega structure that was going to be built next to my children's grammar school. As parents, we were concerned about trucks and diesel emissions and the children breathing that and safety. But then I learned about storm water and I learned about storm water because a canvasser from Clean Water Action came to our door.

And I said, well, you know, there's this big development going on in our town. And I do know that the storm water will be flowing into what's called Forge Pond. And I did know at the time that Forge Pond flowed into a river that served as our drinking water. Now, it was all because of the canvasser coming to the door that I learned about this. Well, I kind of dug some more now, so it was the late nineties and I didn’t have a cell phone so I went to the local library to look up environmental organizations in the area. And that's how I did find Clean Water Action because I remembered from the individual that came to the door. So I called up the office and explained the situation.

Joe Deckelnick was the Clean Water Action organizer at the time and he just jumped on it and helped us and gave us so much information, but also helped us to educate the local officials. And this has a very happy ending where that big mega structure where the storm water was going into Forge Pond did not happen. So that was the first interaction and then I had a second one. I used to love to go to the library with my children and they would have the reading circle and all kinds of fun programs. So went to a program and as we're checking out our books, I saw a box that said, collecting baby teeth for a study. And the study was called the Tooth Fairy Project. I said, well, what is this?

I took the little slip of paper and it explained that we lived near a nuclear plant and there was a researcher who was looking at levels of Strontium-90 in baby teeth. Now one on earth is Strontium-90? I went back to the library to learn about it. And I found out that it was a radioactive material, very dangerous that only a occurs in the environment if there's a nuclear bomb, atomic testing, or a nuclear plant. And I said oh my - they're looking to see if children have Strontium-90 in their teeth! Well, it took off from there and I came home and I told my husband, Joe (who's been such a wonderful supporter…couldn't do anything without him). And he said, well, you've got baby teeth upstairs, put them in the envelope and let's see what happens. And don't, you know, I read in the newspaper that yes, children living in communities in like an 18 to 20 mile radius of this plant had Strontium-90 in their teeth.

As a mother, you just want to faint dead on the floor. And so again, I said, you know what, I'm going to call Clean Water Action. And that's what I did. And, one thing led to another and with their help, we formed a group called GRAMMIES (Grandmothers, Mothers, and More for Energy Safety). And we just kept going and going and put together a wonderful coalition of grassroots individuals like myself and environmental groups like Clean Water Action. It was during that time where we would bring this coalition together and we brought it together around the kitchen table. And this is such a fond memory because what we would do is we would share a meal. We would lay the table beautifully and share a meal and we would talk and we would figure out what we were going to do.

I just love Clean Water Action and now it was Peg Sturmfels who was the program organizer at that time. I just loved the camaraderie, but I also began to see that Clean Water Action did so much behind the scenes without getting credit a lot of times. I thought what an amazing group of people, and it was from that nuclear work that I was invited to then join the board, which was a terrific honor. And then to become board chair came through this because the organization is so dedicated and so dedicated to doing good for other people, not for themselves, but making sure everybody's okay, making sure that everybody has access to clean air and clean water. It's not self-driven; it's driven by a concern for the entire community and for the environment. That's why I love Clean Water Action. And I hope to be able to stay with them for years to come.

And I cannot not mention the kindness that was shown to me by the staff. I was just a homemaker in Brick, New Jersey and the Clean Water Action just put their arms around me and said – what can we do to help you? That's one of the things that after these years of fighting, you know, serious battles and fighting big corporations - being able to come out of all that, and still being able to look at anyone and seeing good and not hating – just that we have a goal. This is how we're going to there. We're going to stay committed, but we're not going to hate anybody. Even if they work for a really bad corporation, that's doing bad things - if you talk and you talk and you're calm and you try to see a shred of good in someone, usually you win. And it it's good for us as a person. It's good for our souls. It's good for our humanity. And now I'll get off my soapbox. Thank you very much.